I passed on Yoon Ha Lee’s Ninefox Gambit a few times because it sounded a bit strange. Teaming up with an undead general…in space….what? It also had words like ‘Fortress of Scattered Needles’ and ‘the hexarchate’ and my brain just kind of glossed over the words and decided – nope!

But eventually my brain finally decided to give it a go – and what a go it was. 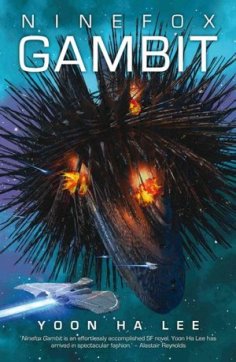 In plain English, it’s a book about a siege with a bit of space warfare thrown in. But it also uses a calendrical belief system which allows for exotic weapons effects (somehow). And thrown into the mix is a  young Captain mentally linked to a long ago dead General (who has committed a massacre in the past of his own soldiers). It’s…strange.  But strange good.

Just like in The Fractal Prince and its sequels, I kind of interpreted a lot of that text as ‘thing goes boom’. What made it more interesting was the ‘exotic’ effects, as they were called, weren’t just bullets but weird things that would affect people and formations. Like random amputations or everyone turned to glass. Like I said, weird.

The story mainly centres around Captain Kel Cheris and the disgraced (and ghost-like) General Shuos Jedao. They need to take back the Fortress of Scattered Needles but the general went mad in the past, so there’s a multi-layered chess game going on between them. One to beat the heretics (who don’t use the orthodox calendrical system) but also to survive the plotting of the hexarchate (the government basically). It’s all a bit cut-throat really.

What made it really come to life is that Cheris and Jedao are both really interesting and fun to read. The battles and the whole calendrical system and the heresies are super interesting. Essentially heresy is a function of hardening political lines and preferences for exotic weaponry – which is totally amazing. It was just a really fun universe and I’m totally going to pick up the sequel later this year. I’m really interested in the fall out from this book on the hexarchate and what happens to the central people.

The plot also ticked along quite well – in that the battles and tactics were interspersed with the political and personal maneuverings happening in the back ground. It let us have punctuated bursts of excitement with smooth characters development and the unfolding of plots. I also like the interesting twist in the General’s motivation that we get a glimpse of at the end of the book.

My main criticism would be that it is a bit hard to wrap your head around. There’s a lot of abstract concepts that don’t totally make sense all the time. Especially when you get to big battles and it’s just ‘WORDS OF THINGS HAPPENING’ that are so abstract that it’s hard to really get a sense of what is going on. But this isn’t the only book to ever have that problem, so I’ll give it a pass.

I think I really liked it because it wasn’t just your average battle in space.  The belief system, the structure of society, the underlying cruelty of the system, the political shenanigans – it made it very fun in an unpredictable way.  There’s strangeness in this universe that I’m glad we’ll be able to explore more.