To continue in the great-novella-read-a-thon that seems to be my last month of reading, I bought The Black Tides of Heaven by J Y Yang on Kindle. There have been many good things said about it, so why not.

It’s got a lot going for it. It’s set in an indeterminate place and time. But the orbit is faster than ours as the sun sets 5 times in a day (if I read that right) and so its not Earth. People at whatever time they choose can declare their gender and then become that gender (which was pretty neat). There’s a sort of magic called Slackcraft that various people can do. But this particular part of this world is dominated by a pretty ruthless woman, The Protector. Two of the main characters are her children, twins Mokoyo and Akeha.

The cover image is 100% excellent. 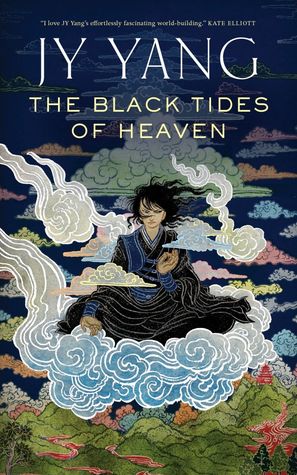 So, I was well into this book for about 2/3rds of the way through and then it kind of sagged.

I enjoyed the political intrigue between the Abbot of the Grand Monastery and the protectorate. I liked the relationship between Mokoya and Akeha and the problems that their powers bring. I liked the gender balance of the characters (lots of women, even ruthless ones like the Protector).

But then all of a sudden, Akeha runs away and then it just kind of stops being as interesting. It’s still fine but it just slows down. As well. I think it was a bit of a bridge too far. We zip through Mokoya and Akeha’s childhood, their life in the Monastery, their return to their mother, their decision on what gender to become. And then this whole rebellion thing with the Machinists appear. And you’re like, well, that was a really rapid change in events.

Like sure, people are unhappy with the Protectorate. I can understand rebellion. But this whole other way of using Slackcraft to create modern weapons just was too much for such a short volume. Maybe it gets into it a bit more in the second novella and it makes more sense.

But that whole third act just had waaay too much happening that I just kind of lost interest. It broke the world building in a bit too fast, I think. Unlike the Murderbot Diaries, which had just one main focus to the plot, this seemed to have a new one every 25 pages. So just as you were getting to something interesting to everyone happening, it would suddenly be 10 years later and you had to reinvest your mental energy into an entirely different plot.

It was still interesting, and I like the general idea, but I just couldn’t be taken along for the ride at such a clip. And I do like destination, rather than journey (read excessive sub-plot detours), most of the time but this was just too fast. I liked all the characters and the interesting way of dealing with gender. Not everyone was straight, not everyone was white. It was a good, more diverse cast of characters in such a short volume.

Not much more to say as it’s a pretty quick read, being a novella.  Anyway, the first 2/3rds were excellent, the last 1/3 a bit of a rush job. Maybe you won’t find it as disjointed as I did. Might pick up the second one, we shall see.