Last year it felt that Annalee Newitz’s first novel Autonomous was on every must read list. For some reason it was always in a very expensive hardback, so I didn’t pick it up on a random whim (I came very close when I was in Oslo because holiday money isn’t real money). However, it was on my Christmas list and lo and behold, it was wrapped up and waiting for me on Christmas day.

And I don’t think it disappointed. It was certainly very interesting, compelling even. It had an interesting set of characters and the plot was nicely propelled along. 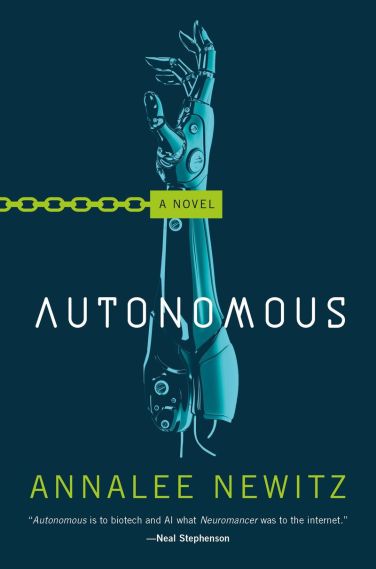 The main thrust of the story is kicked off by a ‘pirate’ Jack – who reverse engineers pharmaceuticals and sell on the black market. She sells productivity and anti-aging drugs to be able to pay for more worthy drugs. However, this lands her into trouble when she reverse engineers a new productivity drug that has a hidden flaw. Instead of saving lives, she’s now the reason for people dying.

The world that we find Jack in is interesting, though for some reason, I didn’t find it all that believable. Maybe this is my own naive hopefulness for the future. The world was a bit bleak. The two antagonists in this story are agents of an international copyright enforcement agency (a human and a robot). People can choose to become indentured or have their indentured contracts sold off and essentially become slaves. It’s not a great place (or some places aren’t great anyway).

And so while it made for a compelling world and helped propel the tension and conflict, it always felt a bit unreal. However, it didn’t stop me from enjoying the story.

The other main thing that took me out of the story was the two antagonists – Eliasz and Paladin. They have, shall we say, an interesting relationship. However, I felt it hard to sympathise with them on that front when they also went around brutally dealing with Jack’s associates to find her. I didn’t want them to have a happy ending as I wanted the pirates to win. So it was an odd juxtaposition – having all this emotional chat with those two while the other bits were brutal violence. It was certainly interesting (maybe challenging) but for me, a tad too far.

But it was still very good. Again, the characters were well crafted, the world was interesting, it had good pace. There are elements of that universe that I wish there was more time to explore, like the free robot city. There was some broad strokes painted here and there that I would have liked to spend more time in.

What was also really well done was the entire exploration of being autonomous. It wasn’t just about Paladin the robot but also about Jack, Threezed and Medea. It was cleverly done and occasionally popped up in different places that you didn’t quite expect. It was an aptly titled novel.

Definitely worth a read.