I finished this book last night and spent the next 30 minutes wallowing in sadness and FEELS.

I moped, staring off into nothingnesss, trying not to cry (too much) as I thought about the last chapter over and over again.

Needless to say, I had quite a reaction. I imagine part of this reaction is due to the fact that I read them both in quick succession. So all the time spent with the characters in the first book was still there at surface level. Maybe if I had read the first awhile ago, it wouldn’t have felt SO SAD. 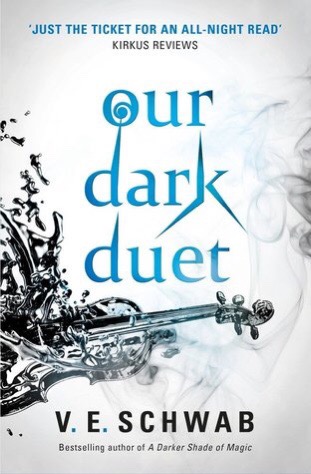 Right. ENOUGH WALLOWING IN SELF PITY.

Our Dark Duet takes place about 6 months after This Savage Song and we start out seeing snippets of both August and Kate’s new lives. August has assumed Leo’s role, and is trying to block out wanting to being human. Kate is in Prosperity, working with a group of monster hunters to tackle their burgeoning monster problem. Things in Verity have gotten worse – Sloan and the Malachi Alice (made from Kate’s actions at the end of the last book) are now ruling the North City.

And then Kate returns. AND SO DO ALL THE FEELS. And of course, you never wanted her to leave in the first place. So biding the time until her and August meet again, willing it to happen.

She comes back to Verity to hunt down a new monster, which causes people to turn violent. And of course, the only place left to go is the FTF (which she isn’t exactly popular, given her history). And this is what makes the book so good. The last half of it is just a whole series of tensions, some that bubble up to the surface and pop, letting you breath for the last half of a chapter. But others building and building until the last few pages of the action. You’re just buoyed by hope and love of these characters, how lovingly crafted and real they seem.

The tensions rocket between Kate and random members of the FTF, Kate and August, Alice and Sloan. I had to take breaks between chapters because I was just so TENSE. And then I just ran for it, reading the last 100 pages or so as quickly as I could. I JUST COULDN’T TAKE THE STRESS ANYMORE.

And it hurts at the end. Looking back, you can see that the ending that happened was inevitable. There are hints at the end of This Savage Song and in this book, that if you weren’t blinded by how much you want something to turn out one way, it was never going to happen. BUT I’D READ IT ALL AGAIN DAMMIT.

And of course, being V E Schwab, there is so much in this book to love. The characters are unique, from the monsters Sloan and Alice to the personalities of all the different Sunai. But as well, there’s diversity and gender balance. Alice, Ilsa, Kate are all incredible characters in their own right. Alice is a wonderfully twisted version of Kate, you can see she’s her own monster but the roots are built from Kate’s past.

I loved this book. But I have been heartbroken by it. Writing this review now, I’ve got prickles coming to my eyes and want to torture myself by rereading the last few pages again.

It was so lovingly devastating.