Full disclosure: I was given a code to read Jessica Mae Stover’s Astral Fall after chatting to the author on Twitter.

It’s a bit hard to describe the plot of Astral Fall as the plot shifts in quite dramatic ways. So, from my perspective there are these major shifts: 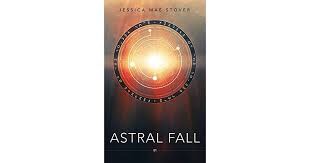 There are some other minor quibbles I have with some of the narrative. Sometimes, because of the way the conversations between characters are structured, you have to re-read certain sections to know who is saying what. As well, I may have not paid enough attention when reading the first few chapters, but I missed out on what some of the different acronyms meant and so occasionally got confused about what the particular thing they were talking about meant.

And while there are several women characters, none of them (so far) seem to be main characters. There are two that were certainly important to the other male characters, but the action and internal dialogue focussed on two main male characters: Crave and Thwip. But, I should add, the women are the same expert elite Nova soldiers or soliders in training. There’s no difference between them when it comes to their abilities – which is great. I even like that it isn’t hammered home that they are equal, its just a baseline assumption.

Anyway, aside from those niggles, I really enjoyed Astral Fall. I really, really enjoyed the batshit craziness that was happening in the final act. It went from being a sci-if space opera to a bit of a horror/psychological mindfuck that I really want to read the conclusion to. I mean, I think my heart rate went up from it being relatively chill to OMG WHAT IS GOING, I AM REALLY A BIT TENSE HERE. OMG IT JUST GOT WORSE. In a good way.

As well, the other thing I really liked was the universe. At the moment its all military but even then, there’s lots to enjoy. I enjoyed the interesting tech that the Nova have. There was a relatively long section exploring it and its capability (through the eyes of Thwip, who had to get used to his new elite gear) which makes the last act really interesting, and I think adds to the creepy/horror feel that makes you sympathise with the character experiencing it. I’m being deliberately vague here, because I don’t want to spoil things. I also like the Nova culture, it is more in-depth than generic space marine.

Anyway, I am now very intrigued about the fall out from this first book – and how its all going to get resolved. It’s a huge cliff hanger and I NEED TO KNOW WHAT HAPPENS. Right now I’m just wondering if all the set-up and structure of the society that you have come to know through the characters is all a lie. You just don’t know! There appears to be something rotten in the state of Denmark…I guess we’ll find out if that’s true in book 2.